The Ethereum merger is expected to go live in less than a day, which would completely transition the network from a proof-of-work mechanism to a proof-of-stake mechanism. This essentially puts Ethereum miners out of business, which means they have to find another place to move their mining machines. As always, Ethereum Classic has been there to take over as miners move their gear to the forked network.

Ethereum Classic cleans it up

With the upcoming merger, Ethereum miners had to find other places to move their mining capacity. Ethereum Classic presents an opportunity for these miners to put their equipment there. A decision that caused not only an increase in the price of the digital asset, but also a significant increase in the mining hashrate.

As Ethereum miners switch to Classic, the hash rate has jumped over 150% in just two months. This is even with a small percentage of Ethereum miners moving their businesses. However, although Ethereum Classic is a GPU-minable coin, it is impossible to completely take Ethereum’s full hash rate.

In light of this, Ethereum miners have also switched to other GPU-mined coins such as Ravencoin. Much like Ethereum Classic, Ravencoin saw its price and hashrate increase with the move, but they are still not able to take all of Ethereum’s hashrate. 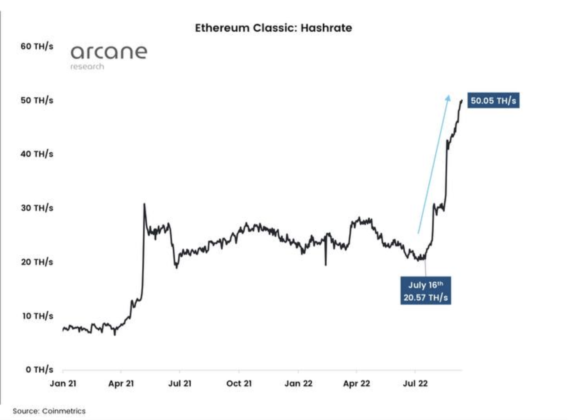 The dilemma for these miners comes from the fact that ETH mining equipment cannot be used to mine bitcoin. It is also assumed that all GPU-minable coins in the crypto market can only absorb 15% of the mineable power of the ETH blockchain. After that, mining becomes unprofitable for miners. It is therefore possible that the majority of ETH miners end up with millions of dollars of machines that are no longer useful for mining activities.

What happens from here?

It is impossible to fully determine what will happen to Ethereum miners after the merger. One thing that has been significant throughout the past month has been the introduction of a hard fork of the ETH proof-of-work network.

With this, miners may be able to keep some of their hashrate on this bifurcated network, ensuring that they can continue to make money from mining activities while transferring some of the mining power to other networks.

It is also possible that small GPU-minable coins will grow in size due to new interest from ETH miners. This could mean that they could take a bigger chunk of the mining power, but the vast majority of the ETH hash rate will still have nowhere to go once the merger is complete.