A new car manufacturer is entering the world of NFTs. We can finally wrap up the NFT-centric saga in the Tarantino and Miramax dispute. These are just a few of the biggest stories from the past week across the NFT landscape – let’s review these, and more, from the past seven days.

A final update from Tarantino and Miramax: rules

We can finally close the door on the long-running saga that has been the dispute between Quentin Tarantino and Miramax over Tarantino’s “Pulp Fiction” NFTs. The two sides reached a settlement agreement in recent days, according to reports, after Miramax filed a copyright infringement lawsuit late last year and this year.

Both parties plan to file severance paperwork in the coming weeks and, in a joint statement, said they have put the matter behind them and look forward to future collaborations – including future projects. Potential NFTs.

The 1994 film “Pulp Fiction” was one of Tarantino’s finest works and the focal point of Tarantino’s NFT Project – which featured uncut scenes from the film. Miramax argued that they owned all the rights with a few exceptions and believed that those exceptions did not include NFTs. Tarantino first announced the project in November last year.

In partnership with The Secret Network, Tarantino released the first of several “Pulp Fiction” NFTs in January, grossing north of $1 million – but the remaining token releases were canceled, as The Secret Network cited the volatility of the market.

Settlement details are scarce, but it looks like Tarantino has the green light to pursue NFT projects – and speculators might suggest that Miramax may see a percentage of the profits on such deals.

US automaker Ford joins an ever-growing list of major brands to express interest in engaging with NFTs. The move comes as the company filed 19 trademark applications with the United States Patent and Trademark Office (USPTO) in recent days.

As our team reported, “Ford plans to offer SUVs, minivans, automobiles, and trucks in downloadable text, artwork, video, and audio files in NFTs,” according to the filing documentation. The company is also considering AR and VR car shows.

Few domestic US manufacturers have explored NFTs, Chevrolet being one of them. Several high-end foreign automakers, such as Porsche and Lamborghini, as well as companies like Nissan and Toyota have also played in the space. 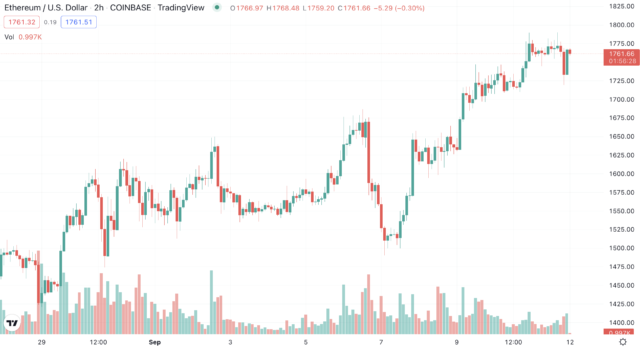 OpenSea will not process forked NFTs after the merge

Goodbye proof-of-work NFTs. At least, that’s apparently the sentiment of NFT market leader OpenSea last week. As the long-awaited Ethereum merger is just days away, OpenSea shared in an announcement that they are not concerned with PoW NFTs and will focus on maintaining PoS NFT collections. PoW NFTs will apparently not be supported on OpenSea after this week’s merger.

Meme coins and NFT collections are inevitable when it comes to making global headlines. This was no exception last week with the passing of Queen Elizabeth, a historic moment that led to numerous NFT troll collections that many found quite unpleasant.

Tech accessories brand CASETiFY is looking to make its mark on the digital landscape. According to a press release – and as detailed by our team in Bitcoinist’s full report.

CASETiFY continues to seek to create this blended physical and digital environment, as the company calls it “phygital”, and could likely look to leverage strong IP partners and/or native Web3 partners as it becomes available. is developing its ARTFT program.